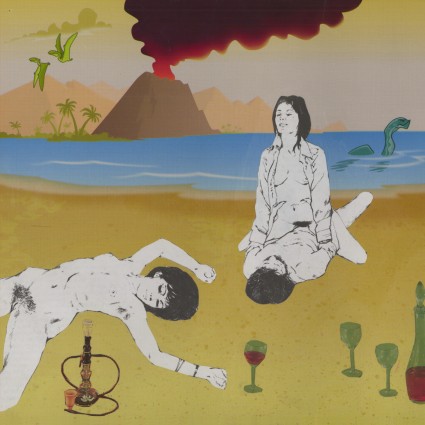 A lot has changed since The Weird Weeds released their third album, I Miss This.  While it has been almost three years since they released any new recordings, the band has not spent this time resting on their laurels.  After extensive touring for I Miss This, in late 2008 bassist Lindsey Verrill (also of Some Say Leland and atheist gospel group The McMercy Family Band) joined as a full time member, adding a welcome depth to an already highly refined method of songwriting.  It was also at this time that the band had just begun writing their fourth album, and though guitarist Sandy Ewen now resides in Houston, they have continued to perform and rehearse regularly, continually evolving in an unforced and organic way.  Over the past two years they have crafted Help Me Name Melody, a stunning set of songs that finds this always adventurous and one-of-a-kind band with a startling new confidence and power.

Now in their seventh year as a band with almost 200 shows under their belt, Help Me Name Melody showcases The Weird Weeds as a band working at an unusually high level of musicianship while also maintaining their reputation as composers of complex and emotionally charged music.  While past albums mostly consisted of densely packed, concise songs, Help Me Name Melody (which takes its name from a bizarre spam email) finds The Weird Weeds at last stretching their legs.  With songs like “More Than a Bit” and the minute-long untitled song that begins the album’s second half, their trademark tightly-composed and idiosyncratic vignettes are still present but are now separated by bouts of ecstatic, hypnotic repetition (the raucous second track, the gorgeous “Sun Comes Up” and the soaring, pulsating climax of the penultimate track).

Stream/purchase the entire album on Bandcamp.